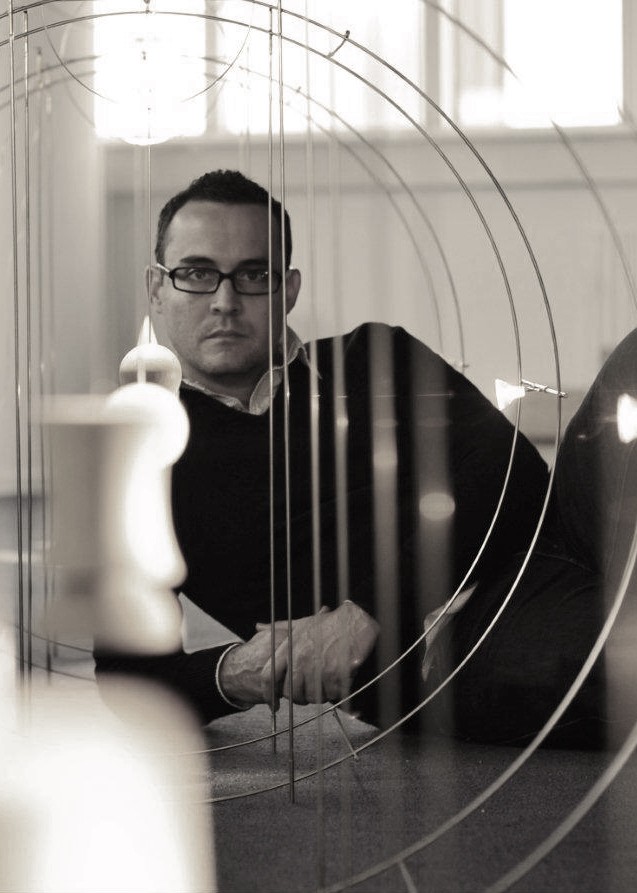 Heraclitus of Efesus showed the roads that western ideas were to follow up to our days. “The world –Nietzsche has said in the most beautiful of possible forms– has an eternal need of truth, and that is why it has eternal need of Heraclitus.” 1

Without pretending to reduce a work of multiple meanings –like that of Cuban artist Inti Hernández (Villa Clara, 1976) – to a reading that recalls the ideas of Ancient Greece, it is unquestionable that we, inhabitants of the west today, continue investigating certain archetypes that obsessed our early philosophers. We still ask ourselves about the origin and essence (what is true, beautiful, fair, good); about the inscrutable human existence, life and death that, like all opposites, would seem to exist in an immanent correlation. It was Heraclitus “the dark one”, like his contemporaries called him, who developed –retaking some ideas of Anaximander and the Pythagoreans– the dialectics of opposites, destined to reveal those great enigmas.
Both for Inti Hernández and for Heraclitus of Ephesus –saving the considerable distances– “beginning and end are one in the periphery of the circle”. 2 And it is precisely this image that enables Inti to create his poetics of “meetings”. If fire, earth, air and water repeatedly coincide in the cosmic circle of the Greek philosopher, in the artist’s orbit the meeting is an absolutely human one. The center of Inti’s sphere is man, his private and social existence. The human being thought as transparency, fluid, energy, i.e., as spiritual subject, and the human being recognized as matter, consistence, physical body, i.e., as earthly being. Man activates the contact between the glass and the water ( Encuentros, vasos I y II ); and, in the same way interacts with wooden structures and mirrors ( Lugares de encuentro, la serie ). The human being is the protagonist of these works, his presence invigorates the pieces and his reaction completes the author’s gesture.
Inti Hernández is a conceptual artist who –far from becoming estranged from the form– finds support in it, creates from it. The meaning of his projects derives from the design materials and the architecture itself. They are mainly minimalist pieces of exquisite finishing that attempt to dialogue with the spectator. His glasses present a text ring that closes in itself in which one can read Vaso del amigo/Vaso del enemigo (Glass of the friend/Glass of the enemy). While the public drinks from them it is experiencing the meaning of these opposites as unity, as complement, as part of one and the same fluid that reaches the lips. Inti provokes the interrelation of opposites and shows that one cannot exist without the other: they are relative terms, necessary conventions to procure the understanding of reality and communication among men.
In this tenth edition of the Havana Biennial he presented one of his latest works: Lugar de encuentro 1/8 , thanks to the collaboration of the Mondrian Foundation of Holland and the Rijksakademie Van Beeldende Kunsten. Exhibited at the San Carlos de la Cabaña fortress (Pavilion K, vault number three), it can be described as a wooden structure with mirrors, elaborated at human scale, that once more, involved the visitors. Indeed, the spectator could penetrate the small architecture conceived as meeting space with oneself and the rest; some staircase steps of arbitrary dimensions succeeded in making the participants submit their full senses to decipher the place and, in this way, they discovered the reiteration of their image in seven points that altogether form a circle. Our real presence became doubtful, our real body got lost among so many equals, our reflection mixed with that of the others that also inhabit space; glances and gestures mixed in that multiplicity of beings.
The artist has explained the following about this work: “A full understanding of the real is hard task, whether the real is a work of art, a building, a concept, a situation of disagreement or simply life itself. I am currently exploring these concepts (…) A place is a meeting place for both friends and enemies. It has to be a place open to discussion and dialogue. In them, each person is invited to explore the possibilities of the pact, the meeting, of a place for reconciliation”. 2
Inti Hernández is a creator of symbolic architectures, of “artistic” places that combine both personal and public space. Ever since his experience as a member of Dupp”, his works have been directly linked to the social and urban space. In such a way that the interest to combine private and public showed gradually in his performances and actions until achieving the projection of these atypical meeting places.
Apparently, Inti Hernández’ anxieties partially coincide with the question posed by Jurgen Habermas: “Are we not conscious of ourselves just because of the other’s glance?” 2 We do not know to what extent this might be true; meanwhile we contemplate ourselves in the mirrors and rethink the wooden steps. More than anything, Inti proposes a staging of human existence; he creates a small dimension that is fully contemplative and reflective, where there is space only for man. In the global era, many have lost the mirrors; they have lost their image… their space. . Lugar de encuentro 1/8 is a work of resistance.

I have known Inti Hernandez for approximately 5 years. I had heard of his name as a member of DUPP a young and emerging artists’ collective based in Havana, founded while they were still at college (ISA).

Both his personal work and his contribution to the collective were very inspiring as it created pieces that engaged directly with the social and urban space, entering into a dialogue with the people who use the city.

The first few pieces I saw made direct references between the personal and the public space through ephemeral interventions that triggered a double take on the passers by. For instance, in an early piece he carved a wooden printing block with the pattern of his bedroom’s floor and then proceeded to stamp the sand in a popular beach with the block, creating a private yet familiar area in an open space. The piece created considerable attention and started a dialogue between him and the public who became involved throughout the process of making the work. Another similar work, involved cleaning a small square of tiles in an almost derelict building in Old Havana. In a country of high governmental control, where independent initiative is seen as a risky business, his piece came across as act of resistance, one that defied the natural decay of life by suggesting that little by little people could reclaim their self initiative and their spaces.

The connection with the public (non art gallery goers) struck me as an integral part of his work. He seems to be making work for people whether this is a through a message or through a something they can actually use. In 2004 I invited Inti to collaborate with Ana Laura Lopez de la Torre (an artist from Uruguay living in the UK) to develop a project that supported the need for visibility and acknowledgment of the fast growing Latin American community in London. In their distinct yet connected way, the artists used their creative energies to organise activities that brought the fragmented community together, getting them to voice their views, needs and concerns. Inti had organised a similar project in a residency in Caracas a few years earlier, where he created “intelligent parties” by inviting cross sections of the community in the city to meet in an informal manner to discuss questions of regeneration that were affecting the areas in which they were living. These were rare opportunities, for instance, for architects to actually meet the people affected by the changes.

Since then, Inti has focussed his work on the utopias that push us into imaging a “better world”. His recent Rijksakademie piece involves a multi faceted structure that functions both as a meeting point for people as well as a space for self reflection, metaphorically creating an island of peace where somebody can see him/herself reflected or it can also function as a place that attract and enhances the presence of people. This spiritual yet collective experience have become a strong point in Inti’s research into ideas encountered beauty, something that may well be constructed but that only reveals itself once people, organically start participating; something that may be personal but that does not exist in isolation.

Over the years Inti has developed his practice both conceptually and formally. He is a perfectionist and yet has a wonderfully gregarious personality that underpins every work he makes. Inti is also extremely dedicated to his work, something that he approaches with enormous passion and follows in its minimal details…

Interview by Curator and critics Gertrude Flentge, The Netherlands

Visual artist Inti Hernandez (Cuba) came to the Netherlands one year ago. Meanwhile he has been selected for a residency at the Rijksakademie van beeldende kunsten, starting in January 2005. What is his perspective on the Netherlands and how does his situation, in between different cultures, influence his works of art?

My work is not separated from my life’, says visual artist Inti Hernandez. ‘In my art I try to find answers to issues that I want to solve in life. When I first came to the Netherlands, I was overwhelmed by the possibilities here. What struck me was the fact that given all these opportunities, people did not appear to be particularly happy. Whenever I speak to Dutch people about this, they often say they realize that they are spoiled. Having lived here a bit longer, it strikes me that this idea of living in spoiled circumstances is a normal idea that many Dutch people have. I think that they are blinded by this idea. The situation here is not easy but actually very challenging, particularly because people are spoilt for choice.

In Cuba the problems are right in front of you. It immediately becomes clear that life is a challenge. What I learnt from that is that whatever I choose to do is fine as long as I believe in it. To become happy and to be alive is to keep yourself going. In the Netherlands, people are much more focused on results, on goals they want to reach.

These days, many people complain about their lives or about the Dutch situation. Perhaps they do not realize what real freedom is. Where freedom begins, compromise starts. If you are completely free there is nobody else you can blame for your own failures and incapacity to lead your life.

These issues I encounter here play a major role in the works of art that I make. My work is often about the miracles of life and about the fact that life is directly in front of you. One idea I had was to draw a sun in the dirt on the glass roof of Amsterdam Central Station. Thousands of people are waiting for the train every day, looking at the dark, dirty glass ceiling. I wanted to use this dirt as material for the sun, which would then shine through an image of itself. The roof has recently been cleaned so the concept cannot become reality. However, I see this as a gift from reality: it made my work unnecessary.

As a resident artist at the Rijksakademie I hope to be able to explore these issues further with people from other backgrounds: scientists, philosophers, technicians, and others. I believe that the Rijksakademie will provide the necessary institutional framework which justifies my work, making me a trustworthy partner. It is not enough here to believe in yourself.